Spring and Summer are the high risk times for biosecurity incursions, with a higher volume of tourism and freight traffic, along with growth lifecycles of most bugs. Ministry of Primary Industries are working hard to keep many bugs out of our shores, with two being of particular high risk. Our horticultural and agricultural production and ability to export to some markets would be affected by new pests, along with being damaging to home production of food crops. Be aware of these bugs as a small population could be controlled, like what has been seen since late 2014 in Grey Lynn, Auckland with Queensland Fruit Fly. If you see any suspicious-looking bugs, please call MPI on 0800 80 99 66. If possible take photographs and/or collect samples.

Brown Marmorated Stink Bug (Halyomorpha halys) is an agricultural pest found in Asia and in the US. It could successfully establish in New Zealand. 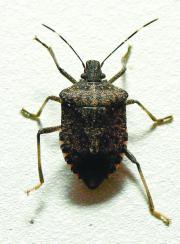 This insect feeds on more than 300 hosts, primarily fruit trees and woody ornamentals but also field crops. Almost any crop can be at risk, including: citrus; pipfruit; stonefruit; berries and grapes; asparagus; soybeans and maize; honeysuckle; maple; butterfly bush; cypress, hibiscus; and roses. Adults generally feed on mature and immature fruit, while nymphs feed on leaves and stems as well as fruit. It severely disfigures fruit and renders it unmarketable, which results in control costs and production losses.  Brown marmorated stink bug (BMSB) damage to woody ornamentals and forest trees has been reported as cosmetic only.

BMSB is not a risk to human health but is a public nuisance. When disturbed or crushed it emits a characteristic, unpleasant and long-lasting odour.

The Queensland fruit fly, is a native of Australia where it is considered to be the country's most serious insect pest of fruit and vegetable crops. 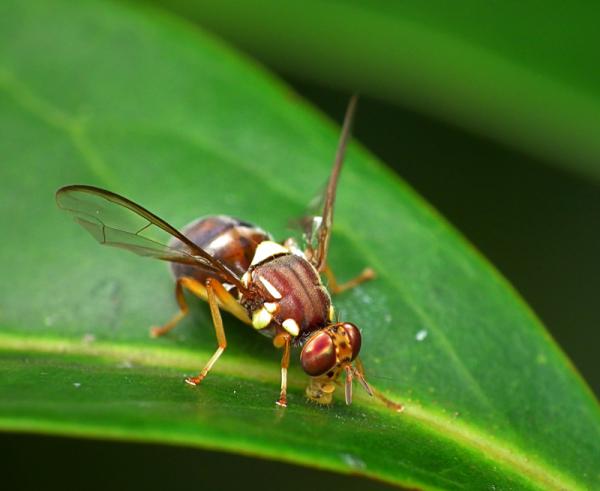 The species is found in the eastern areas of Queensland and New South Wales and the extreme east of Victoria. Queensland fruit fly has also dispersed into Pacific countries such as New Caledonia via human activity.  Fruit flies belong to the family Tephritidae, which includes over 4,500 species, most of which are not pests. Queensland fruit fly is one of the most damaging fruit fly pests as it infests more than 100 species of fruit and vegetables. Hosts include commercial crops such as avocado, citrus, feijoa, grape, peppers, persimmon, pipfruit, and summerfruit.

Information sourced from the Ministry for Primary Industries (www.biosecurity.govt.nz).